It was 6:00 pm in the evening at Hunter’s apartment. Hunter had just gotten home from his boring IT job at the city library, and he was sitting at a foldable table with a computer setup on top. He called it his “battle station”. It was here where he browsed Reddit, watched YouTube, and played video games until he fell asleep. If you asked him what hobbies he had, he would just reply “video games”. To Hunter, video games were his life. They were an instant sharp release of dopamine that he couldn’t get by doing anything else. He owned 415 games total in his Steam library, but half of which were unplayed.

Lately, however, video games weren’t bringing him real happiness like they used to. He saved up $500 to buy a brand new RTX 2070 video-card for his computer, and bought a 30 inch 4k monitor to go with it, hoping these new toys would rekindle his thrill of gaming. Today, Hunter was sitting at his “battle station” playing an old favorite of his, Minecraft. It wasn’t just regular Minecraft though. It was a special modded version with ultra HD textures and raytracing. Hunter started a new game, and chose survival mode. While the world was generating, it certainly still looked blocky, but now slightly uncanny with the added hyper-realism. As soon as he spawned, he knew the drill: walk to the nearest tree, mine some wood, build a crafting table, build a pickax, mine some stone, and continue on from there. Hunter was on top of a hill in Minecraft, and saw a tree out in the distance just below the cubic glaring sun. He was moving his character in a straight line towards the tree while simultaneously admiring how much better all the simple geometric blocks in the game looked on his 4k screen. He kept walking and walking towards the tree, admiring how realistic the rays of light from the distant sun, shown through the tree leaves out in the distance. Suddenly, he fell, and his Minecraft character lost all of its health.

Hunter respawned, and started to continue the same task he failed before. He walked around still admiring the huge graphics upgrade, then suddenly he realized he was still playing the same game as he always had for seven years. He closed out of Minecraft, and loaded up several more games to see how they would look on his upgraded computer setup. And like last time, he closed out of them after a few minutes.

“I can’t believe this.”, hunter thought. “I spent all this money to see better graphics, and I’m not truly able to appreciate upgrades like before. I'm fifteen hundred dollars in debt now because of this.”

Hunter got out of his chair that looked like it was ripped out of a racecar, and then went to his bedroom where he plopped down on his bed. He picked up his tablet that was on his nightstand and started scrolling through Reddit. He went to his favorite subreddit, r/gaming. He scrolled through posts that included a picture of a cat dressed up like Super Mario, crafts that gamer girlfriends made for their gaming boyfriends, and pictures of unopened video game consoles that supposedly were bought at garage sales for five dollars. Close to the bottom of the page, a comic caught his eye. It was about the difficulty of playing an original Gameboy as a kid at night in a car. The kid in the comic was playing Pokemon and was waiting for the car to drive past streetlamps so he could see to play the game for a few seconds and then wait again for another streetlamp to pass by. Hunter was surprised by this. He didn’t know the old Gameboys had no back-lit screens. He vaguely remembered his friends from elementary school having original Gameboys, and only briefly tried one out as a kid. Growing up, Hunter was not allowed to have more than one video game console at a time, because his parents didn’t want him getting addicted to video games. Hunter never bought handhelds as they did not have advanced graphics as consoles for televisions. As a result, he never played Pokemon.

“How could someone enjoy playing a Gameboy like that in the dark?”, Hunter thought. “I’m glad I had a Playstation back then instead of this.”

He scrolled through the comment section. Some comments read: “This brought back memories I didn’t know I had.”, “Good thing I had a worm light back then for my Gameboy.”, and “This proves you don’t need to have pretty graphics for a game to be fun. I’m replaying Pokemon Blue for the first time in years and I’m having a blast!”. Hunter began to question if he was focusing too much on the graphics of video games, and not so much the actual game part. He decided at that moment that he would buy a cheap Gameboy and some kind of RPG game to go along with it.

Hunter went to eBay and searched for Gameboys for auction, and sorted by “Time: ending soonest”. He was surprised nearly three decade old hardware was still selling for fifty dollars. Two auctions ending that night caught his eye. One was a $100 Gameboy Advance with a bundle of 12 games which included: Pokemon Ruby, Mario Kart, Super Mario Advance 2, Super Mario Advance 4, Tony Hawk's Pro Skater 4, and a game that had 369 games in one. The other was a worn, but still functioning gameboy pocket with a “mystery Pokemon game” for just $24.


Which auction should Hunter bid on? 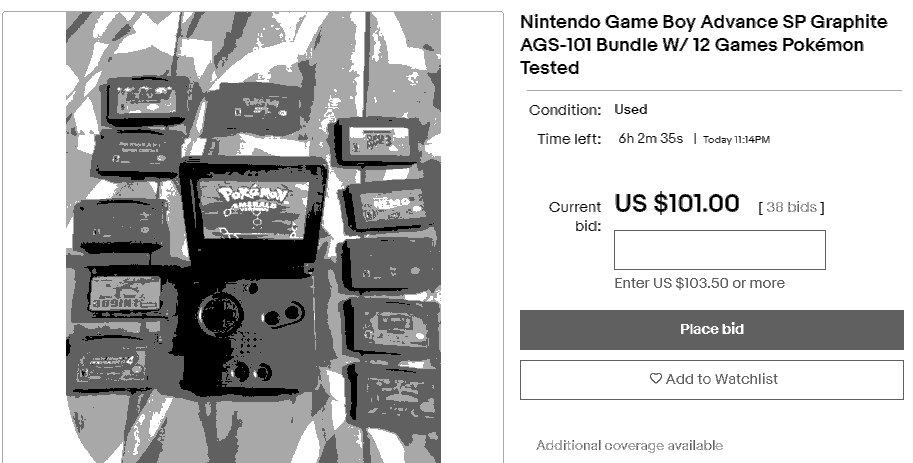